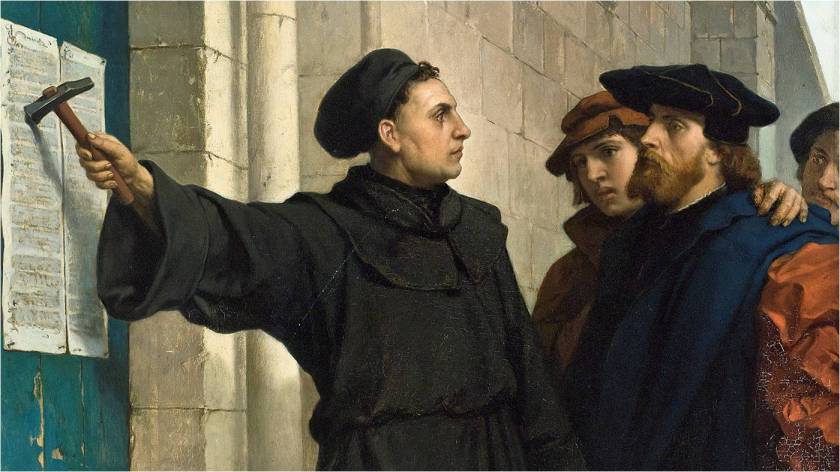 This month of October, followers celebrate – opponents lament; otherwise, most ignore – the 500th year of the Reformation.  It began with the most viral post in history.  Except that the author had no social media to post it in.  In 1517, there was the church door – among other places – to make public a notice or an invitation.  But when the German monk, Martin Luther, nailed his 95 theses on the door of his church in Wittenberg, its result was more viral than any contemporary Facebook post.

The year 1517 was an eventful year in Europe.  Politically, that year saw the rise of Spain as world power as the Habsburg rule became a reality when Charles I made a triumphal entry into Valladolid in Central Spain.  In Egypt, the Ottoman occupied Cairo after defeating the Mamluks.  Perhaps, most important of all – if only to explain productive nights since – it was the year that coffee was introduced into Europe.  So why was a piece of paper on a church door more history-making than anything?

What was it all about?  There are those who see only political conspiracy behind the performance, as German nationalism was emergent.  There was also economic motivation to suspect, as royalties of Europe were jealous of the Church’s wealth; and merchants resented paying taxes to the Church.  Then there is also the suggestion that on that day, Luther had a bad case of constipation!

There was a more reasonable motivation.  And it was not only a debate over the papal indulgences that Johann Tetzel was selling around Europe – though that brought matters into the surface.  Ironically, Luther posted the Ninety-Five Theses just seven months after the conclusion of the Fifth Lateran Council in which Pope Leo X confidently declared that all necessary Church reform has been accomplished.  For Luther, it was a question of what was genuine righteousness – or how is one to be regarded as accepted by God; in Reformation language, justification before God.  This appears on the very first thesis of the 95 Theses: When our Lord and Master, Jesus Christ, said ‘Repent,’ He called for the entire life of believers to be one of repentance.  From the point-of-view of the author of that post, the appropriate tag-line is one that is theological.

Even a secular historian acknowledges this theological underpinning.  In John Whitney Hall’s history textbook, History of the World, it is noted: For the next 150 years Germany – and much of Western Europe – would find itself in a turmoil of social unrest, war and insurrection.  The small peak of the indulgence question rested upon a pyramid of Catholic theology and practice whose foundations were centuries old.  Yet the mighty edifice of the medieval Church and society would eventually shatter and plunge Western Europe into a period of bitter religious strife and political confusion.[1]

An Evangelical historian elucidates this further.  Matthew Barret, in his “The Crux of Genuine Reform,” explains: Countless historians have gone to great lengths to explain the Reformation through social, political, and economic causes.  No doubt each of these played a role during the Reformation, and at times a significant role.  Yet most fundamentally, the Reformation was a theological movement, caused by doctrinal concerns.  Though political, social, and economic factors were important, observes Timothy George, ‘we must recognize that the Reformation was essentially a religious event; its deepest concerns, theological.’  What this means, then, is that we must be ‘concerned with the theological self-understanding’ of the Reformers.[2]

It is the contention of this simple piece that the theology that underpinned the 16th century Reformation is still very much crying out for proclamation seeking contemporary reformation today.

The response of the Roman Church to the Reformation was a massive consolidation of its own theology.  The Council of Trent was convened and, off-and-on, met in the city of Tridentus from 1545 to 1563.  It gave the most official definition of the doctrines of the Church.  It liberally pronounced anathemas on those who differed from the official definition – they were labelled as heretics.  This response of the Church was fittingly called the Catholic Counter-Reformation.

There are those who will assert that the RCC is now existentially different from the Church of Trent; especially since the Second Vatican Council (1962-1965).  One should not deny the reality of changes in the Church.  If anything, gone are the anathemas on heretics, but a more welcoming stance on separated brethren.  The most important change, that Evangelicals must welcome, is the new positive policy to the reading of the Scriptures by the laity: Easy access to Sacred Scripture should be provided for all the Christian faithful.[3]

Evangelicals need not see a specious concession on the part of the RCC.  It is beside the point. We can never limit what power of the Word can seize a liberated reader than it would have been possible if the Bible were still forbidden reading.  Behind this is the conviction that the power of God is behind His Word.  So Isaiah 55:11 declares, So shall my word be that goes out from my mouth; it shall not return to me empty, but it shall accomplish that which I purpose, and shall succeed in the thing for which I sent it.

But that said, one must still underscore that the Roman Church of today is still Tridentine Catholicism in theological essence.  The better spirit of gentleness does not redefine the doctrines espoused and taught by the Catholic clergy.  Indeed, the Vatican II explicitly confesses its loyalty following faithfully the teaching of previous councils.[4]

Beneath the nicety of language and camaraderie, the fight of the Reformation is to persist.  We now have more than church doors to post evangelical conviction.  As Robert Reymond challenges, Such a reformation can and will come only through public doctrinal conflict with Rome, openly pitting both in books, monographs, and pamphlets, and in sermons from the pulpit, first, the carefully exegeted, hermeneutically sound salvific teaching and world-and-life view of Holy Scripture against the superstitions and idolatries of Roman Catholic Tradition, and second, a sound knowledge of Rome’s historical origins against its pretensions. Protestants should not be afraid of such conflict, for the theological genius of the Reformation is really a summons to return to the simplicity of the apostolic gospel.[5]

Reformation is needed by contemporary Evangelicalism

While professing to be heirs of the 16th century Reformation, contemporary Evangelicalism is the product of the 20th century compromises, made sophisticated by 21st century technology.  While the Reformation sola’s are professed confessionally, they are compromised in church life and practice.

Professing Sola Scriptura, there is so much evangelical practice that cannot be explained by Scripture.  From rampant decisionism in evangelism, to man-centred entertainment in worship, there is a dictating voice other than the Word of God.  There is a shallowness even in affirming Sola Gratia that is understood no more than a contrast with salvation-by-works.  But the Reformers meant so much more of grace than this.  Sola Fide has suffered from reductionism that transforms it into a formula step, and removes its vital fruit of sanctification.  As to Solus Christus, one can only repeat Luther’s complaint against the teachers of his day, They say Cross! Cross! when there is no Cross!  The Cross of Christ has been distorted and displaced from its centrality and orthodoxy, to yield to marketing the church and therapeutic spirituality.

With all this defection from Reformation sola’s, where can there be Soli Deo Gloria?  One must begin to weep for evangelicalism.  Those that should be most forward in confessing the legacy of the Reformation are leading in the travesty of its most critical content.  There is a need to refresh the conviction that set aglow the Reformation hope: Justificatio articulus stantis vel cadentis ecclesiae – Justification is the article of a standing or falling church!

Let the sound of the nail on the door of the Wittenberg Church on that morning of October 31, 1517 awaken yet again today’s churches from their complacent stupor.  As Michael Horton puts it, If we are convinced that the Protestant Reformation was the greatest recovery of the gospel since the time of the apostles and that it left us with a treasure whose riches await rediscovery by a new generation, then surely a new reformation represents a goal for us… We are not only confessional (that is bound to believe, preach, and teach that which our confessions set forth), but confessing.  It is not merely a commitment to a past fidelity, although it is that, but it is also our confession in this time and place.  Our world, surrounded by new fears and false hopes, requires a new confession – not new in its message, but fresh in its delivery.[6]

What the Reformer John Calvin asserted is needed today: The excellence of the Church does not consist in multitude but in purity.

[5] Robert Reymond, The Reformation’s Conflict with Rome – Why it must continue: 129

[6] Michael Horton “The Sola’s of the Reformation” from James Boice and Benjamin Sasse (ed.), Here We Stand – A Call from Confessing Evangelicals: 103

This is a text widget. The Text Widget allows you to add text or HTML to your sidebar. You can use a text widget to display text, links, images, HTML, or a combination of these. Edit them in the Widget section of the Customizer.
Loading Comments...
%d bloggers like this: